Hello everyone, I decided to create a new area specially dedicated to the events I’ve had to participate in either as an apprentice or by sharing some of what I’ve learned. And, to start on the right foot, I’m going to talk a little about the gift I got on my 2022 birthday. On January 13th of this year, I had the honor to celebrate my birthday by opening the year of meetings of the Data on Kubernetes Community at the invitation of my friend and teacher Bart Farrell.

In the spring of 2020, a community is born inspired by the growing movement of CNCF and motivated to share knowledge and create a network of practitioners and enthusiasts to take advantage of the capabilities offered by Kubernetes, which was designed to stateless processing for workloads that need to be stateful such as Databases. Thus was born the “Data in Kubernetes” Community ❤️.

Whether you are dedicated to stateful workloads or not, I highly recommend that you join this fantastic community. You will have a lot to learn and, if possible, share the tremendous material regularly available on its various channels.

On January 13th, I celebrated my XLVIII birthday and received a great gift from a special friend, my Master Bart Farrell. Bart does a great job promoting to the four corners of Orbi the CNCF community focused on data, Data on Kubernetes (DoK). Bart gave me the honor of being interviewed for his channel/community on his start-of-year program – I can say that he opened my year with luck 🍀. In Episode 110 of Data on Kubernetes, we talked about an excellent tool released by Oracle, the Oracle Database Kubernetes Operator.

Our meeting is available on the DoK youtube channel, but I found it helpful to transcribe my main comments. Bart recalled that in October 2021, a panel took place where one of the Oracle Product Managers was present, highlighting what was being done internally to provide execution of Oracle Database on Kubernetes. So, I had the opportunity to reiterate that Oracle is acting heavily and having a lot of success to make Oracle Cloud Infrastructure and Oracle Database key pieces to simplify developers’ lives and help them deliver the best products.

On this occasion, it was also possible to clarify that years ago, Oracle had already certified Oracle Database to run on Docker (containers), including providing an official image in its container registry, the Oracle Container Registry. They made it more straightforward for the developer to run Oracle Database on their workstation.

One narrative that I tried, and I try all the time, to demystify is that using Oracle Database for development is problematic because it is too heavy or oversized. It is not valid, and we have been working more and more to make Oracle Database the best option for developing modern applications. We have massive deployments; shall we say weighty ones? Yes, of course, we have thousands of customers worldwide and customers whose core workloads run and rely on Oracle Database. But, this spectacular platform is fully scalable to run in a container or on many clusters in large deployments.

Another interesting point and relatively less explored until today are that since its 12c version in 2013, the Oracle Database architecture has been modified and is now container-oriented, called Multitenant; This platform offers the concept of a “pluggable” database, which would be containers that can move from one deployment to another, the Pluggable Databases (PDBs). You can view this documentation at “Multi-Tenant Architecture Overview”.

After all, since 2013, with a poetic license, Oracle Database has been very similar to Kubernetes, an orchestrator specialized in database containers (pluggable databases) that must be taken into account to build the data persistence layer of the microservices in this newer application architecture approach, commonly referred to as the modern application development approach.

This introduction was essential to highlight the opportunities developers have to use the best database technology for their products today in modern architecture.

We then moved on to the topic of the meeting, the Operator for Kubernetes, when we talked about this exciting project that I am delighted to know and use. On this topic, I have an article that describes the Oracle Database Kubernetes Operator. I would be very grateful for your reading and feedback.

In summary, in addition to the Operator description, I have detailed the Operator’s certified execution options, including the possibility of executing it on the workstation with minikube, and also Database options such as single instance. For example, by combining minikube and Oracle Database Single Instance, the developers have the most powerful and used enterprise database on their workstations to build microservices at a professional level.

I also mentioned that this same configuration is of great value for DBREs, Database Reliable Engineers, to study and improve the operation of this high-level environment, all of this ready in just ten minutes.

Interestingly, Bart’s question about the concept of DBRE, what would this term be that he increasingly saw on LinkedIn, mainly being referenced by Brazilian professionals. So I had the opportunity to explain the concept and how I saw this role as a natural evolution for DBAs with the function of operating database sites.

At the end of this beautiful chat, I was again presented with original art that I will keep forever as a trophy and a Rap made by my friend Bart.

Thanks Bart, my dear friend. Thanks DoK Team/Family. 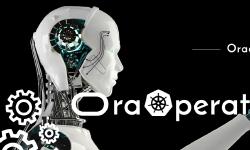 Let the Oracle Database Operator for Kubernetes Do the Job